Let me tell you about the incredible one-cent bra.

My local Nordstrom Rack is a hit-or-miss joint, erring on the “miss” side of things. I have found a handful of wonderful things there. As I literally only go to Nordstrom Rack to scavenge the lingerie section, I set aside all the time I spend there to methodically comb through the clearance racks, where the non-matrix sized bras lie out of size order and hang from one strap off plastic hangers (my inner former-retail worker has to at least fix this). But I went. I did some mild fishing to get there, asking my partner if he, by any chance, wanted to go to the mall. I lucked out, and we went, and I was incredibly lucky in my selection.

Recent readers of BWaD will know that I am in a sizing conundrum of sorts, which is why trips like this are incredibly valuable to me. They are the only opportunities I have to find “unusual” sizes. This has the caveat of being entirely dependent on whatever my Nordstrom Rack has slopped together in the sad clearance section, which is what makes shopping there so difficult. But I wanted to test different sizes. Feeling like I am unable to fit in the bras I have currently (I’m looking at you, my 30E Marcies which make me cry because I love them and they gape and the gores eventually hurt me), I wanted to check different sizes – or, more accurately, smaller ones. Also considering my recent preference towards a looser band (say, in the 31″ region), I wanted to try some 32 bands. This meant that I was hunting for 30E, 30DD, 32DD, and 32D. As it so happens, I found some. The one I want to cover today is one that was marked at $11 and made my day by only costing one penny at the counter. The one-cent bra.

It cost a penny. A PENNY.

Wacoal is a brand that I have seen/am familiar with, yet never actually tried. Frankly, I just don’t care for most of the bras Wacoal releases for US/Europe (if you check out their Japanese selection, on the other hand, !!!so wonderful!!!) – they often fit that very beige/matronly/boring mold. This is fine as far as basics go, but I can’t help it. I like a little drama. So the bra I found today was such an understated one that I almost didn’t even see it on the rack. Honestly, I would not have purchased it off Amazon/any other website, as it does not look that impressive on its stock photos, either.

But the thing is pretty, in the end – yet not without issues, which you will quickly see.

I altered the gore and unfortunately do not have pictures of it before, but you will see that it’s huge in its stock photos.

The In Bloom Underwire is an unlined number, beige with pink/cool undertones. It’s actually spot-on as far as matching my skin. As a frame of reference, it’s slighter darker than the Comexim Basic in beige. The In Bloom is a 3-part cup with one sheer section at the top, where the embroidery happens to be, and where I happen to like the embroidery. This is reminiscent of the Avocado Kyoto that I basically mention every time I write a blog post (the one that got away…), but sparklier and with less color in it (no faint pink/green).

I was genuinely impressed with this when I took it to the fitting room. So soft. I checked, because I was curious, as it has a high percentage of nylon in it, which I think is why I found it so soft. It was instantly comfortable and surprised me with how well it actually fit/shaped everything. This is basically a full-cup bra, and I have never been happy in a full cup. I am curious if this is because the cup size is 1 down from what I would normally go for (it’s a 32D, where I’d expect to take a 32DD). Who knows. I have no idea what the boobs are up to anymore. Anyone?

The glaring issue with this bra is the gore. I have a sensitive sternum. Sometimes I feel like my body is just a little, trembling chihuahua because of how sensitive I am to things. The gore was instantly a no-no, which I could tell when I took it off the rack, but I was still curious to see how it would work. Because the gore is basically just thin fabric between two cups (and because I know how to take a gore in), I decided to go with it. I do not have any decent photos of the gore pre-alteration, but, well, it’s wide. It was 1.5″ wide. If you need a wide gore, absolutely try this bra.

Overall, the gore alteration ended up being somewhat annoying, as the pearl detail on the gore wasn’t particularly cooperative (and I basically ended up sewing through the ribbon detail, whoops), but I am very pleased with this $0.01 bra and am now interested in Wacoal in general. For any readers who are more familiar with this brand, would you say that Wacoal runs large in the cup? Please help your local brogger.

It’s difficult to show the shaping, however, I really do like the profile it gives me. The elastic on the top of the cup cuts in, but other than that? Pretty darn good.

It is, unfortunately, a first-degree Armpit Chafer. This was not something I noticed in the fitting room, but I notice it as I type this review in my standard sitting/typing slouch. This is odd to me, especially since the strap placement is so, well, centered. Oh well. You can also see up there that I am indeed getting wrinkling in this, but that picture features the Littler Tittler.

I think the In Bloom Underwire is a good match for projected, wide-set, full-on-bottom shapes that need narrow(ish) underwires. The strap placement is also more centered than I have seen on other bras, so it’s fantastic for those of us who suffer from widely-spaced straps. 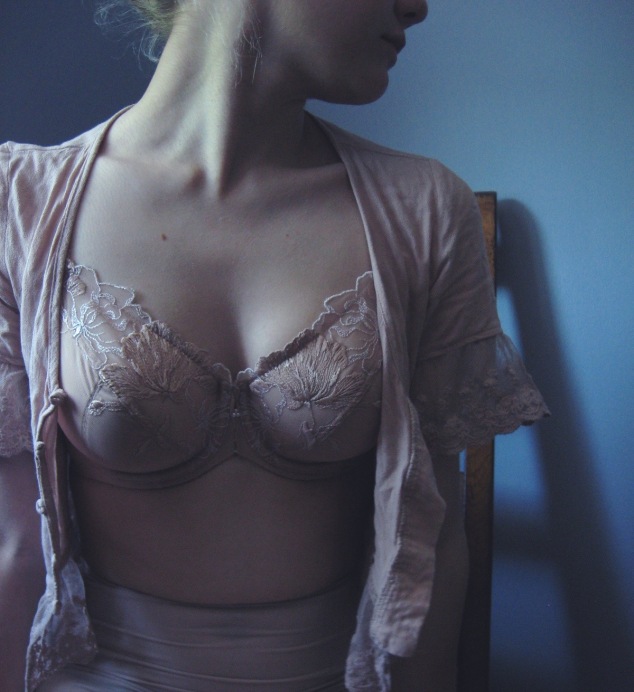 One penny. One penny bra. The incredible one-cent bra. Did I mention it only cost me a penny?

Appearance of bra itself (7/10)—Let’s be honest: this isn’t a particularly dramatic bra. Despite that, it’s a good basic.

Appearance of bra on my body (9/10)—I am really pleased with the shape this gives me! It isn’t half-sphere territory, but it’s a rounded shape. One point off for cutting in at the elastic trim.

Straps (10/10)—I REALLY like the strap placement on this! It feels more centered than most bras I’ve worn.

Band (10/10)—I was really surprised when I measured this stretched, because it’s basically a 34 band. Even so, this doesn’t ride up and I find it breathable/soft. So comfortable! As someone who gets extremely irritated at the band area, this is fabulous.

Gore (6/10)—Off the rack, the gore is REALLY too wide for me – it was on breast tissue, which just isn’t a comfortable sensation. After the alteration, the gore is improved – it doesn’t tack, but it’s not on breast tissue. I do think the gore is somewhat high and I wish it was lower, honestly. The gore is the main problem I have with this bra.

Underwire (8/10)—The underwires are a great width (it’s right at 5″, yay!). I wish they weren’t as long, but it’s doable. I don’t even need to bend them (hooray!). Points off for the length of them, but they’re generally ok.

Cups (9/10)—I love the cup material. It’s pretty darn soft. However, it’s at the armpits. So far, this isn’t enough to make me abandon the bra, but I’m fully aware of it slowly rubbing the old pits, which apparently have never known a day of peace in their lives.

What did In Bloom get? The Wacoal In Bloom (32D) gets…

84% – I am very happy with In Bloom, especially after the Gloria broke my heart in my last post. Thank you, Wacoal!

Have you tried Wacoal? How do they generally run? Hate them? Love them? Give me your thoughts~